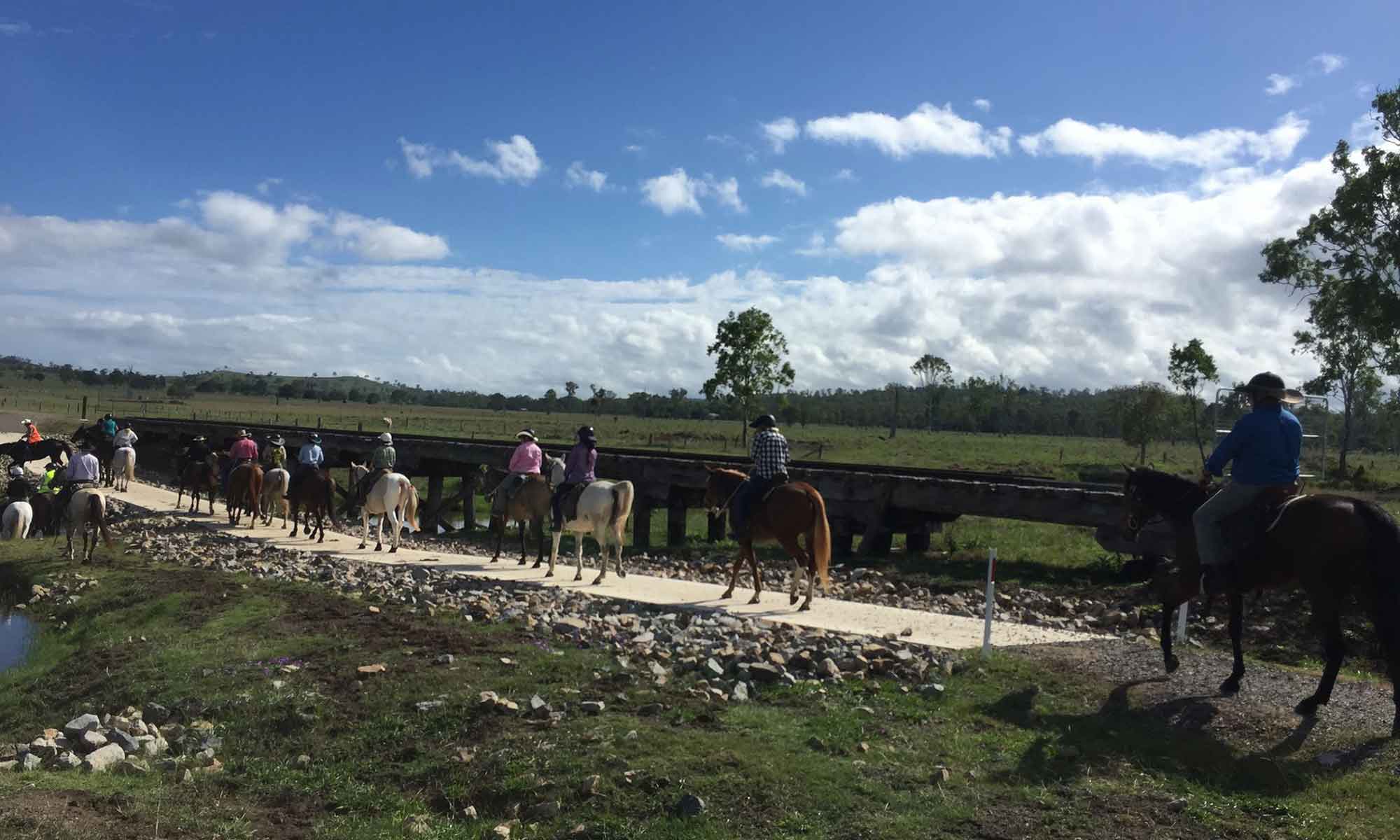 At Easter time a group of eight riders including myself, from the Bouldercombe Trail Riders group took part in the “End to End Trail Ride” in the Brisbane Valley.

The ride commenced just north of Ipswich and travelled up the rail corridor to Yarraman. A distance of about 170km moving camp each day. The ride distance averaged about 25 km per day.

A typical day would start with a self-catered breakfast, feed, saddle horse and put together gear you would need for the day’s ride. After this we would pack up our float and follow the leader to the next stopover.

There would be 30 or more horse floats traveling to the next town which did add to early morning congestion, but most people were friendly and would have wondered what was going on. Backup crew would stay with the horses until we returned by coach.

The backup crew met us at a designated place, where we made our lunches from a selection of foods provided.

The last leg of the ride for the day would take us to our next camp.

It was good to see in the small towns that we passed through, the interest shown by people seeing so many horses together in one place.

Between 38 to 40 horse riders plus organisers and backup crew made for about 50 meals, fuel and horse feed at each stopover.

We camped at showgrounds and recreation grounds in each town. The meals were provided by local service clubs and pubs. Horse feed was organized beforehand for a local supplier.

Good features of the trail and lessons learnt

About 80 percent of the track was the original formation with the ballast removed. This was a good surface for horses to travel on.

The section between Toogoolawah and Moore has been resurfaced with crushed blue metal which is sharp and hard on horses feet. Bike riders along the way didn’t like the surface either as it causes lots of punctures.

Good features along the way were rain water tanks which gave access to drinking water for riders, bushwalkers & bike riders as well as troughs for horses.

Grid and gate at boundaries – gates need to be swung from the grid side to make it easier opening from horseback; Where adjacent land owners are using the corridor, the fences must be maintained or removed completely.

We encountered a lot of loose wire lying on the ground which was very dangerous. In these sections cattle are keeping grass down so there is less need of maintenance – ie slashing.

Some of the crossings with concreted pathways around bridges are finished a bit to smooth – would be slippery when wet.

The one tunnel we encountered between Toogoolawah and Moore is of similar construction to the tunnels in the Dawes Ranges. The horses travelled through the tunnel quite well until we reached a gate on the northern end and our gate opener had trouble with it.

As we had a lot of horses in a dark and confined space it could have been a problem, but luckily nothing untoward happened. Something for us to avoid with our tunnels if possible.

Between Blackbutt and Yarraman there are 2 sets of yards for possible overnight stays/camp.