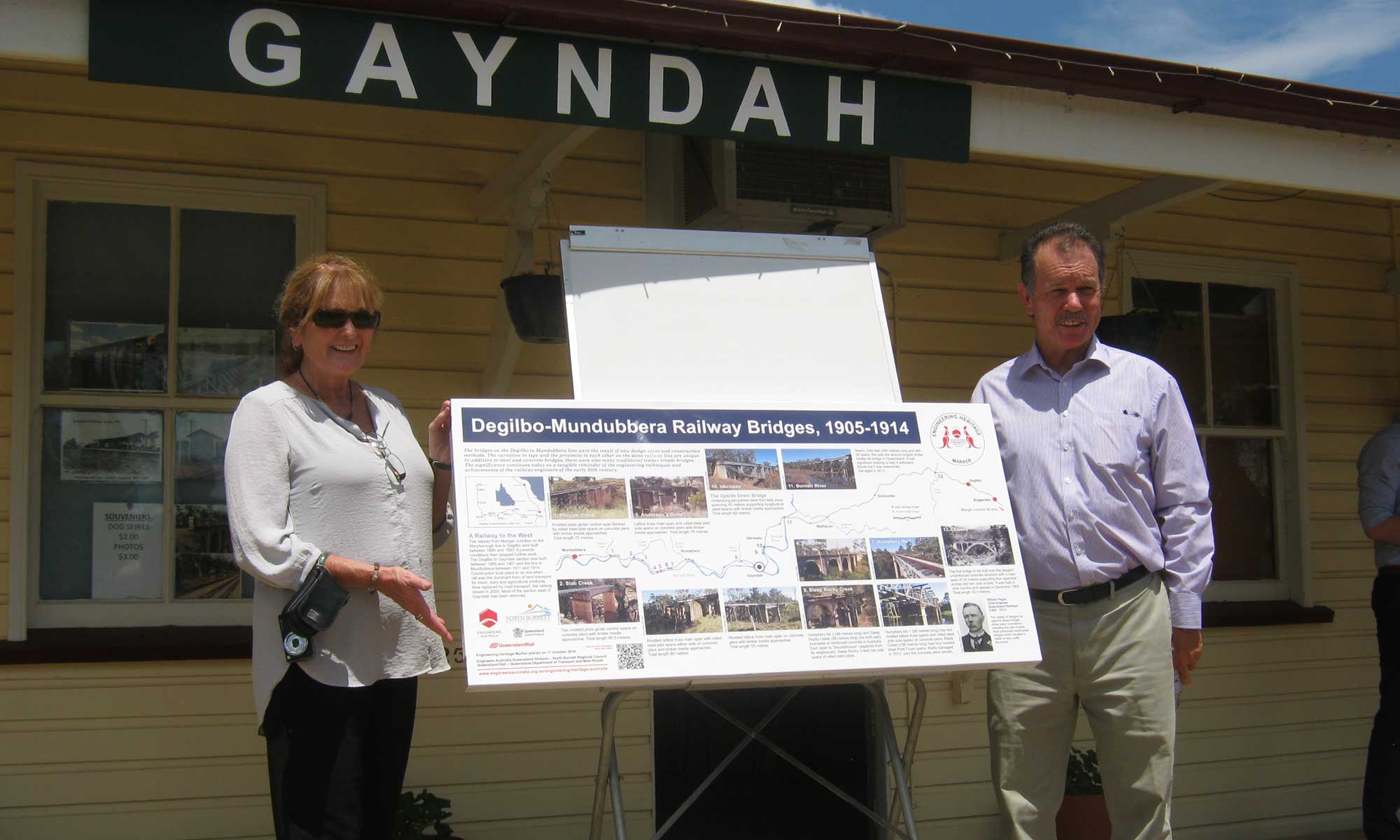 The Boyne Burnett Inland Rail trail has some remarkable and historic infrastructure, none more so than its bridges and tunnels. These are set in beautiful Australian bush landscapes.

This depicts the Delgilbo to Mundubbera railway bridges constructed from 1905-1914.

Queensland President of the Australian Engineering Heritage Association, Mr Alan Churchward said they represent the “Best example of a collection of historic railway bridges in Australia”.

Mike Goebel and his fellow members of the Burnett River Rail Trail Group are to be congratulated for bringing this to fruition. It is a wonderful document.

This post contains all the information from the Interpretative Panel , and is used with permission from Engineers Australia. Please respect their full copyright as the original publishers.

The bridges on the Degilbo to Mundubbera line were the result of new design ideas and construction methods.

The variation in type and the proximity to each other on the same railway line is unique. In addition to steel and concrete bridges, there were also many traditional timber trestle bridges.

The significance continues today as a tangible reminder of the engineering techniques and achievements of the railway engineers of the early 20th century.

The bridges were built under the supervision of William Pagan, Chief Engineer Queensland Railways.

The variety of designs he used for these bridges show many innovations including the use of parts from previously-constructed bridges which resulted in better or less costly structures.

A Railway to the West

The railway from Mungar Junction on the Maryborough line to Degilbo was built between 1889 and 1893. Economic conditions then stopped further work.

The Degilbo to Gayndah section was built between 1903 and 1907 and the line to Mundubbera between 1911 and 1914. Construction took place in an era when rail was the dominant form of land transport for meat, dairy and agricultural products.

Now replaced by road transport, the railway closed in 2004. Most of the section west of Gayndah has been removed. 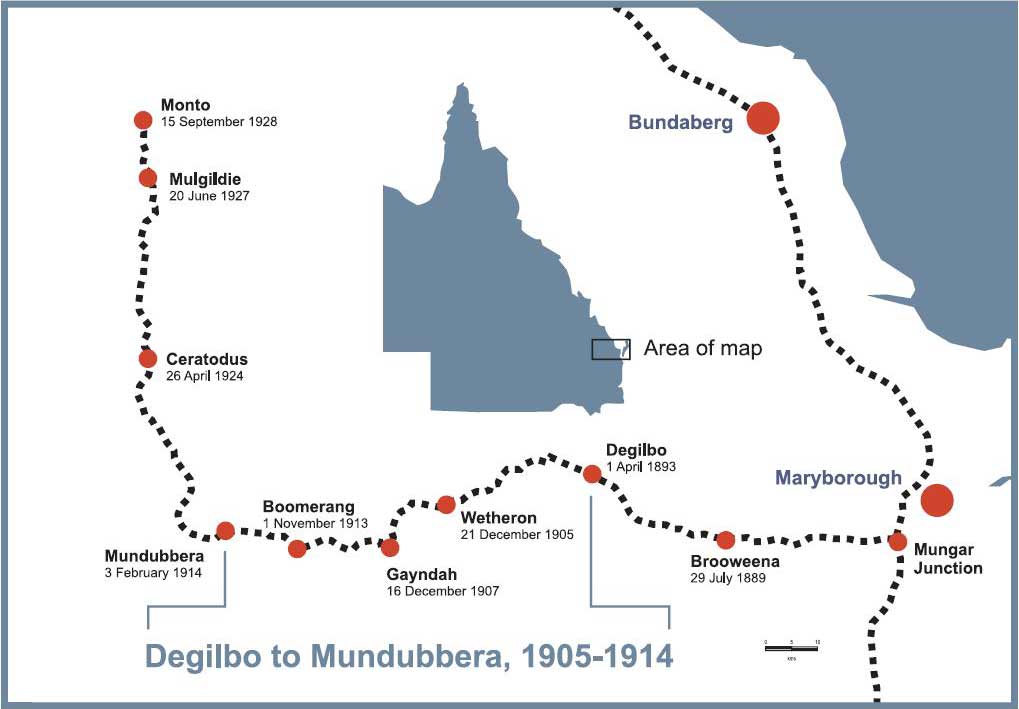 Click the images to see a larger version in a lightbox. Hover over the individual images to pause the slideshow. There is a map at the bottom which will open in a new lightbox, showing the location of each bridge. 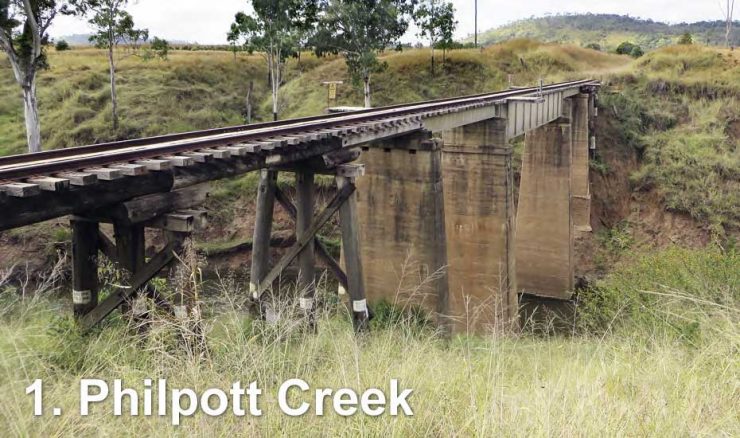 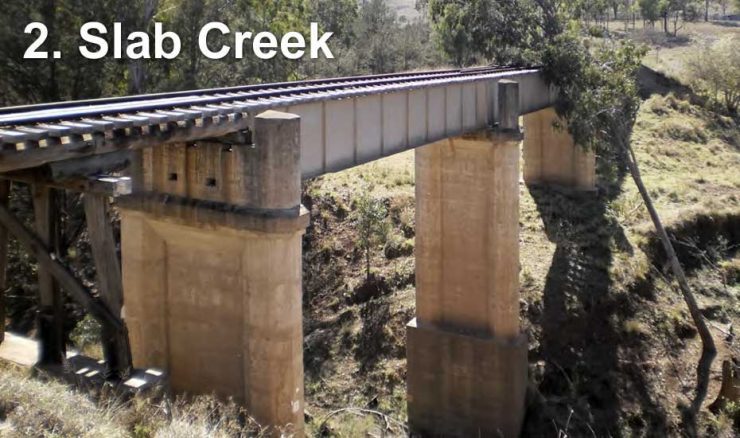 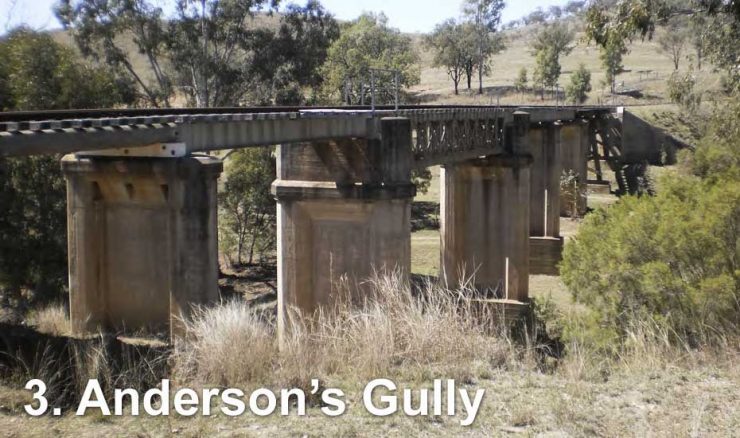 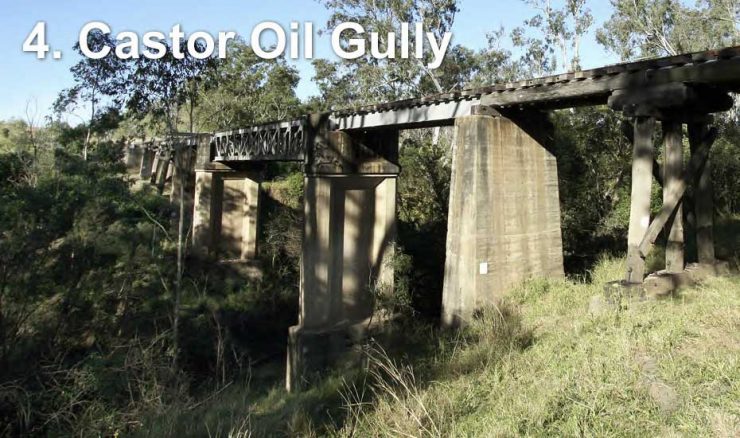 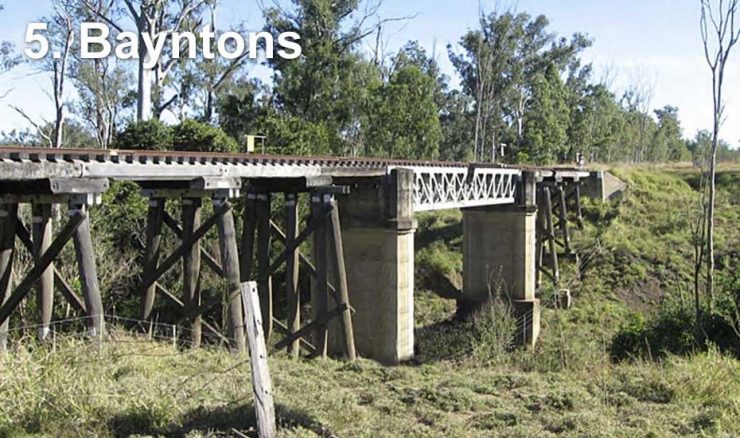 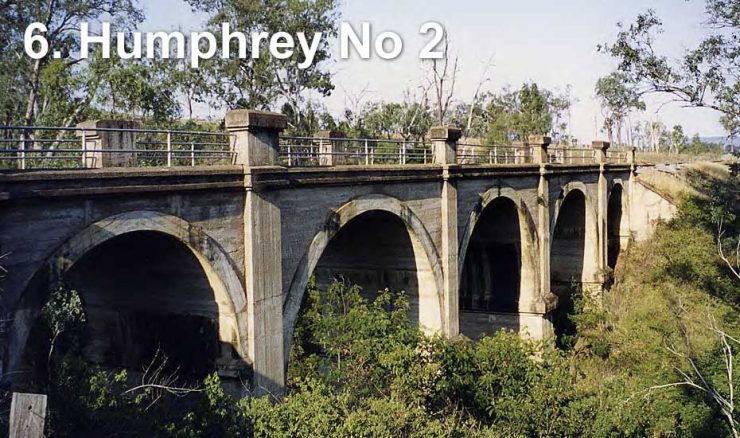 Humphry Number 2
Humphrey No 2 (48 metres long) is an early example of reinforced concrete in Australia. Each span is "discontinuous" (separate from its neighbours).
Photo credit: John Mellor, 2002 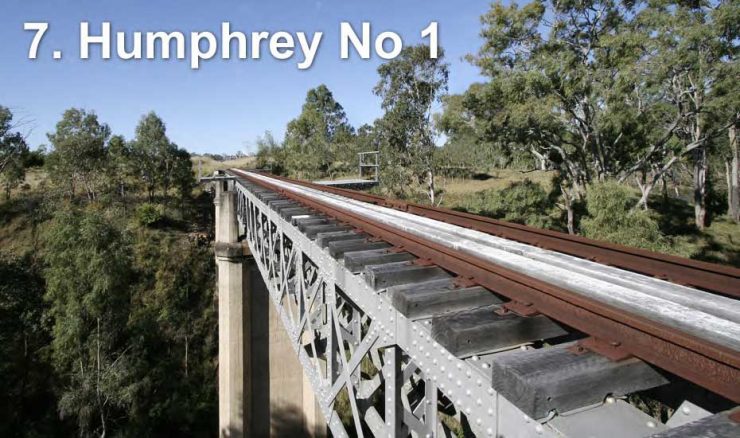 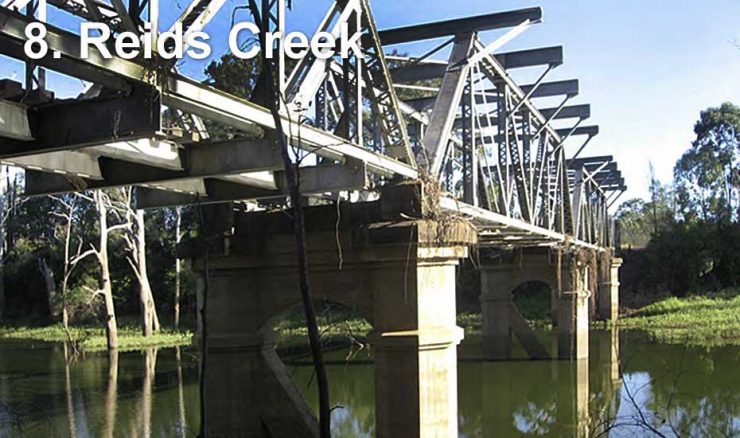 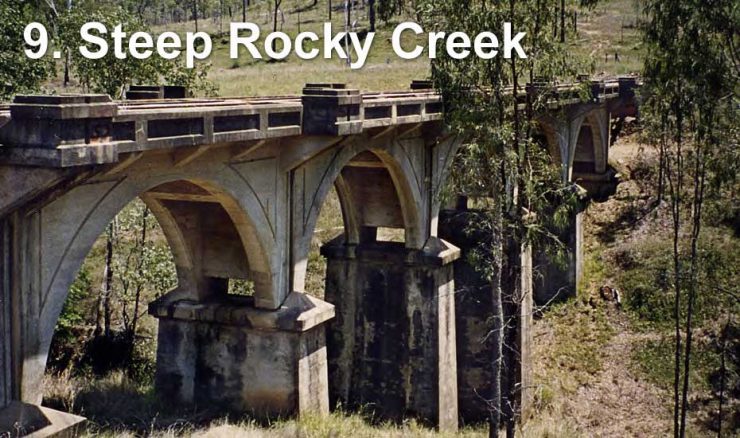 Steep Rocky Creek
Steep Rocky Creek (58 metres long) is an early example of reinforced concrete in Australia. Each span is "discontinuous" (separate from its neighbours). It has side spans of rolled steel joists.
Photo credit: John Mellor, 2002 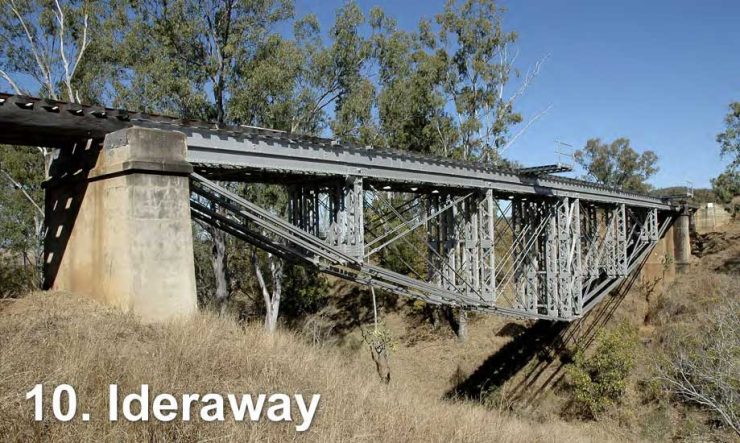 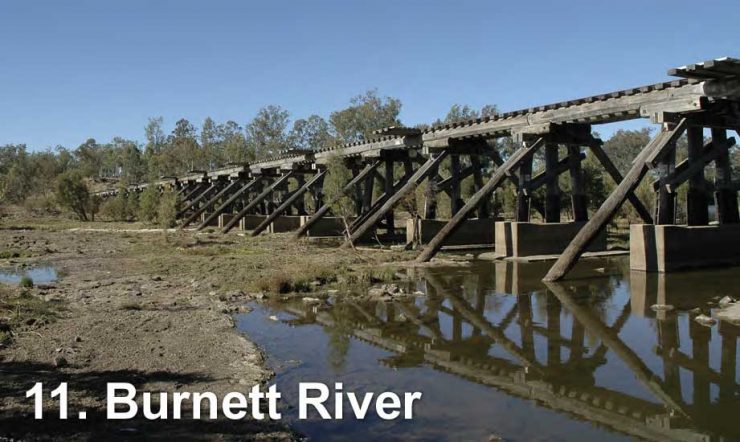 Burnett River
Nearly 1000 feet (294 metres) long and with 58 spans, this was the second longest timber trestle rail bridge in Queensland. It had significant bracing to help it withstand floods but it was extensively damaged in 2013.
Photo credit: G&K Rees, 2011 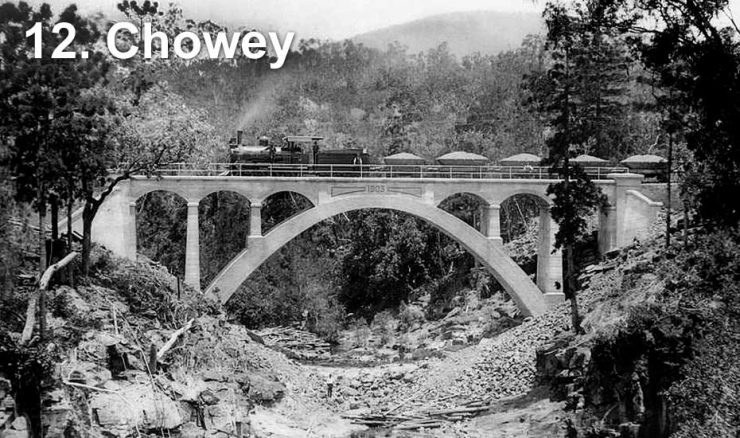 Chowey
The first bridge to be built was this elegant unreinforced concrete structure with a main span of 24 metres supporting four spandrel arches and two side arches. It was built in nine months and opened in December 1905. The bridge is State Heritage listed.
Photo credit: John Oxley Library API-73

The bridges on this site described as “Steel Box Girders” are not box girders but  “plate girders”.
The bridges described as “lattice truss spans”  are not lattice trusses in the generally accepted  use of the  term but “pratt trusses”.
These trusses are reused wrought iron spans from the original 1865 line between Ipswich and Grandchester and the 1967 line between Rockhampton and Westwood.
They were strengthened before use on these bridges.